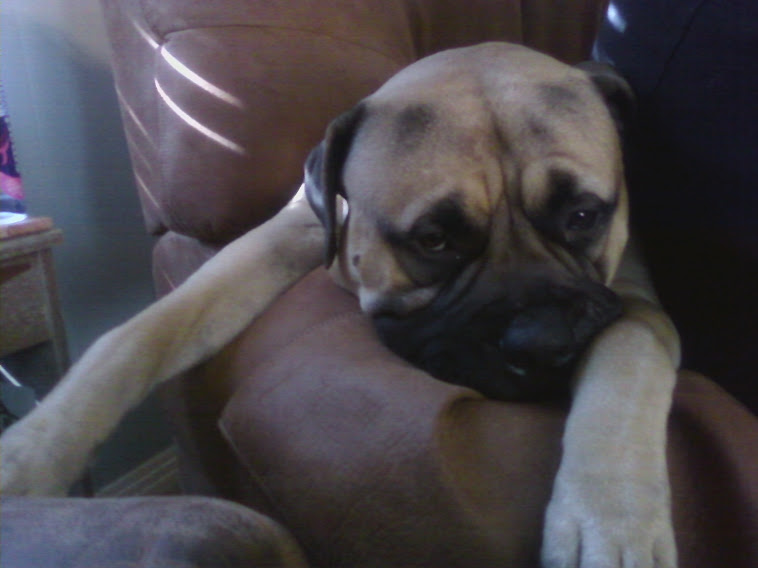 How to bathe a Bullmastiff and survive 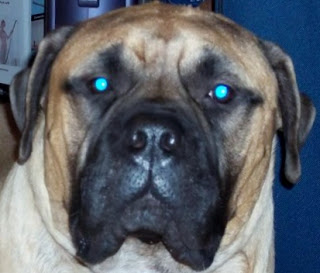 This is Bear he's our 150 lb Bullmastiff.  As you can see Bear is no little dog.  Bear is just about the perfect dog except for one small thing.....Bear HATES water.  Yesterday we decided that Bear needed a bath.  We don't do them too often and this is why...

When the tub is full I have to send a text to my husband letting him know I'm ready and we text back & forth to decide which door to go through.  This is so I know where to stand & hide.  Today we decided to use the hall door.  That means I hide behind the door ready to close it once we are all in the room.
My husband calls him and they go "looking for momma" and the walk in the bathroom.  I hurry up and shut the door!  He looks around, see's the towel, the bathwater & looks up at me like "CRAP I fell for it again!"  I reach over and take off his collar and he starts to back up to the door.  He'd go through it backwards if he thought he could push hard enough.  That's where my husband I start "herding".  We get behind and beside him herding him to the tub.  Then we say the words "Ok Bear get in the tub."  I don't know why we say it because it's never worked in almost 5 yrs but we say it.  I guess it's routine.  Then we go to try to get him in and that's when it happens...he goes DEAD WEIGHT!  150lbs of dead weight suddenly becomes 300lbs.  This is where we start laughing as we try to pick up a dog who when you try to pick him up won't stand his feet.  I mean he goes full rag doll.  Well today when he went dead weight his back foot was on my foot and then you have his full body weight on it and I'm laughing but also yelling "he's on my foot and I swear bones are gonna start breaking an second!"  Now my husband is laughing harder and by some miracle I get him off.
Then we regroup and as always my husband (lucky one) reaches under him on both sides on the front half while I do the same on the rear half and we hoist his fat butt into the tub!  Now you have the tub with my husband on the left and me on the right.  We have 2 cups to wet him down and the shampoo.  2 adults equals 4 hands to wash him with right? WRONG!!  You see we each have are left hand pushing on Bear using our body weight to keep him in the tub while hes pushing trying to get out of the tub. That leaves 2 hands for washing.
We wet him down and start lathering him up GOOD in shampoo and he decides to make a break for it!  Then we form a wall, use all 4 hands & my husband somehow leaned in and used his head while I threw up my leg and used my thigh all to push him back and keep him from escaping.  Now we are both wet.
He has escaped before and if you think trying to get a 150lb DRY dog in the tub you should try it with one that's all lathered up with soap...oh and by then we are laughing and that makes it harder!!
So we get him all nice and clean and I start draining the tub and grab a towel because the "goal" is to get him dry while he's still IN the tub.  Hell I'd take mostly dry while he's still in tub.  But as usual we get about half way dry when he realizes we don't have so much force holding him in there and he leaps out of the tub.  Then with cat like reflexes I grab the other towel to throw over him before we can do the shake.
Remember Turner & Hooch?  Yeah he's a big dog and a wet dog which means water....everywhere!! Now you have feet & legs to dry which now equals 2 exhausted adults each armed with a towel chasing a wet dog all over the bathroom trying to dry off feet.  With that accomplished we move on to putting in the ear wash.  I don't know how he does it but when he see's it he bows his head and tries to put it UNDER his body in an attempt to get away.
Once this is all done then the bathroom door is opened and he's gone!!!! He won't go near the bathroom for a few days.  My husband goes for a brush and I'm left in there with the towels wiping up the water off the floor and cleaning out the tub.
We are done for this round.  The dog and the humans are left exhausted and the humans are sore!  Bear takes a nap, I take pain pills & my husband takes time to sit in his chair and not move for a couple of hours.  But in the end Bear is clean.
By the way I'm taking volunteers for someone to give him is next bath if you are interested?
Posted by Who did it? at 9:32 PM

Who did it?
I am a working mom, happily married and living with Multiple Sclerosis. I live a crazy hectic life between home, work & my MS I do the best to make it all work. I believe that you should give something of yourself to someone each day to improve your quality of life and to always have a positive attitude.